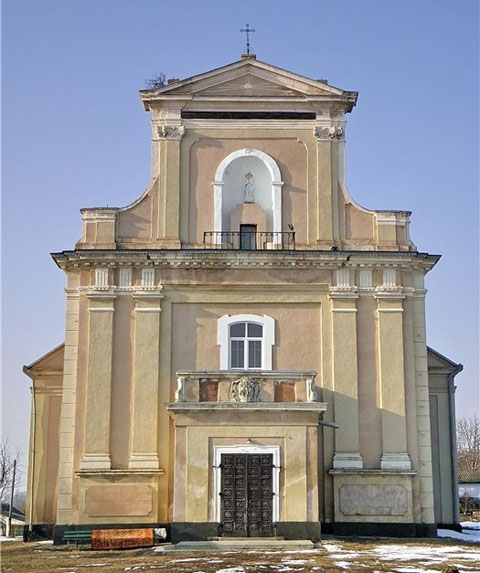 On the map
Duration:
Transport:

Tarnoruda is one of the most interesting settlements on Zbruch. Despite the total impassability, I visited here for the second time. And I’ll go a third time, because here are other objects that I didn’t have time to see. There are two villages called Tarnoruda: one – on Khmelnytskyi bank of the Zbruch River with a population of 856 inhabitants, and the second, tiny, on Ternopil coast, where only 18 people live. I have already told about Tarnoruda in Ternopil region. Today I will tell you about the more rich in monuments Tarnoruda in Khmelnytskyi region and a little more about Tarnoruda in Ternopil region. Before the division of Poland in the late XVIII century Tarnoruda was one town. According to legend, as early as 1355-1365, two nameless brothers built the first wooden temple here. This is due to the miraculous image of Christ the Savior, who was seen on the hill at the confluence of the Tarnorudka Stream into the Zbruch River by some Andrew from Ripna village. He took the image to himself before, but in the morning it returned to its place. This was repeated several times until Andrew went to a priest. He recommended to build a temple on the spot where the icon was found. The majestic Baroque church of Tarnoruda stands, ostensibly on the same hill. Officially, Tarnoruda was first mentioned in the XVI century. The name of the settlement comes from a combination of two words: “terno (thorn)” and “ruda (ore)”. “Ruda” (or “small Fumaria officinalis”) called the part of the village in the valley that later merged with the “terno”. In 1569 the settlement came under the rule of the lords of Kremenets district of Volyn voivodeship, and in 1578 it is mentioned as the property of the owners of Sataniv, the Odrovonzhs magnates, who owned it for more than three centuries. In 1583 Tarnoruda received the Magdeburg right and became an important trading point in the upper reaches of the Zbruch River. The coat of arms of the town depicted a silver rose with eight petals on a blue background.

As for the history of Tarnoruda, I will say at once that I do not vouch for the truth of what is written below. There is very little information, and what is available is contradictory. According to the well-known researcher of Podillia Yevtym Sitsynskyi, after the Odrovonzhs Tarnoruda belonged to Kostkas, Syniavskyis, Dunins, Chartoryiskyis, Liubomyrskyis and, finally, Malchevskyis.

In 1643, thanks to the efforts of the owner Kateryna Seniavska, a Roman Catholic parish was established in Tarnoruda. In the same year, a church was built on the left bank of the Zbruch River (now Tarnoruda in Khmelnytskyi region) on the site of an old wooden chapel (allegedly Uniate), destroyed by floods. The newly built church was consecrated by Bishop Stefan Rupneskyi of Kamianets. Probably, the church was destroyed during the Liberation War of 1648-1654 and during the Turkish occupation of Podillia in 1672-1699. The church was rebuilt in 1754 at the expense of Princess Izabella Lubomyrska of Chartoryiskyis in the late Baroque style and consecrated under the title of the Blessed Virgin Mary. The walls of the temple were one and a half meters thick, and the churchyard was surrounded by a wall, on the sides of which were two towers, from which no trace remains. There were 7 altars in the interior. Until 1884, the church was covered with shingles, after which it was replaced by tin and arranged a dome in the Orthodox style. The miraculous icon of Christ the Savior remained in the church until 1920, when it moved to Ternopil, and later to the Polish town of Zielonka Pasłęcka. It is preserved behind three curtains in the main altar. Every year on the Ascension there were pilgrimages to the icon. The web page of the village writes that due to the miraculous image until 1920 Tarnoruda was the same pilgrimage centre for Roman Catholics as Pochaiv for Orthodox, and Zarvanytsia for Greek Catholics.

During the Soviet era, the temple was closed and the interior destroyed. In the middle of the council placed a store of mineral fertilizers. Next to the closed church, a “palace of culture” was built, the facade of which with a constructivist portal faced the west, and closing the church was supposed to symbolize the “flourishing of socialism” in front of the “Polish” Tarnoruda, located on the other side of the Zbruch River. Bell on the bell tower: The coat of arms of the founders of the temple is poorly preserved: Only one inscription of the two on both sides of the coat of arms has survived:

Oak doors seem to be original: In 1870 a parish school was opened in Tarnoruda, which was located in a small peasant hut. In 1897 a school for girls was opened, and in 1908 a ministerial one-class specialized school was opened. There were post and telegraph office, several private shops: pharmaceuticals, sewing machines, leather goods, manufactory and grocery in the village in 1913.

Undoubtedly, the most interesting building of Tarnoruda is a two-story palace in an eclectic style. Unfortunately, I cannot take responsibility about its history. In various sources, it is found as the “estate of the Frontkovskyis” or as the “manor of the Mordvinovs“. According to Sitsynskyi, at the turn of the 19th and 20th centuries the owner of Tarnoruda was Ignatius Malchevskyi, married to Antonina Dunina from the Sanhushkos. An amateur site about Tarnoruda (tarnoruda.at.ua) tells about a mysterious Mr. Lutsenko, who owned Tarnoruda and the surrounding villages (the tsarist government would not allow a Ukrainian to own so much land, and even on the border!). The same Lutsenko went to Moscow at retirement age, where he found an 18-year-old beautiful wife named Nadiia. Lutsenko died soon after, and Nadiia married a military engineer from St. Petersburg, Officer Mordvynov. I don’t know if it’s about that Count Mordvynov, also from St. Petersburg, who built a luxurious residence in Yalta? After moving to Tarnoruda, Mordvynov built a beautiful two-story red brick palace on the banks of the Zbruch River. The sides of the building were decorated with towers topped with spiers, which made the palace look like a castle. Retaining walls, reminiscent of fortifications, also provided it with a defensive look. Oak doors adorned the entrance to the palace, which still has a staircase with wrought-iron railings. On the first floor there were 10 rooms, on the second – a ceremonial hall and 6 rooms. In time, Mordvynov fell ill, and Mariia meanwhile betrayed him. Upon learning of this, the man shot his wife and spent the rest of his life in prison. Naively written school history of the village tells that in the early twentieth century Mordvynov had 912 acres of land, while 350 farms had 1,273 acres of land. The difficult times for the peasants, connected with economy of Mordvynova, are described below: “Agriculture at that time was the main occupation of the inhabitants of Tarnoruda, only some of them were engaged in sewing and weaving. Peasants, who with their miserable land plots could not get out of the original poverty were forced to be hired by a landlord, receiving a meager salary. For a day of exhausted work on a beet plantation, the landlady Mordvynov paid 20 kopecks, in winter the wage did not exceed 10 kopecks in a day. Difficult life, lawlessness caused dissatisfaction with the existing system. In the spring of 1902, the peasants of Tarnoruda began to graze cattle on their own on the field and responded the landlord servants with threats. The frightened landlady turned to the authorities. Several times the county clerk and other officials came to the village. The peasants stood their ground and declared that they would continue to graze cattle. In a telegram to Podillia governor, the peace mediator asked to send Cossacks to Tarnoruda to break the resistance of the peasants. Authorities brutally cracked down on participants of the “agrarian unrest.” He was sentenced to various terms of imprisonment. The landlady plowed the field and deprived the peasants of grazing.”

In the 1930s, a school was placed in the former estate. After the war until 1966 there was an orphanage. From that time to the present day, the former residence of the Mordvynovs houses a village school. In addition to the retaining walls, economic cellars have been preserved on the territory of the estate. Not far from the palace, one-story building of Russian border outpost was saved, which, unfortunately, could be seen only from the opposite side. It was not possible to visit both the Jewish cemetery and the Catholic one, where many interesting tombstones have been preserved. The village web page also tells about the embankments of a building, which according to some sources is a former brewery, and according to others – “the estate of the grandson of the Polish king (???) Franciszek Xavier Malczewski, named after his daughter Antoniny.”

Not far from the church in Tarnoruda in Khmelnytskyi region is a modest Orthodox church. Now let’s move to the opposite, Ternopil coast of the Zbruch River. The Zbruch River, by the way, has as many as 6 shores here: its course has been changed three times. On the shores of the man-made lake-reservoir, which according to locals has the shape of the foot of Jesus Christ, the building of a water power plant of the interwar period has been preserved. The church in Tarnoruda in Ternopil region was built in 1816 at the expense of the then owners Yelyzaveta Chartoryiska and Stanislav Liubomyrskyi. On 28 May, 1827, the church was consecrated under the title of St. Stanislav. In 1885 Tarnoruda chaplaincy belonged to Ternopil deanery and numbered one and a half thousand parishioners. In the early twentieth century Tarnoruda acts as a full-fledged parish with two thousand believers. After World War II, the church was closed. It was returned to the believers of the tiny Roman Catholic community in 1990. On weekends and holidays, a priest from Pidvolochysk comes to rule in Tarnoruda in Ternopil region. Residence of the founder of the Mynkivtsi state – Otrokiv
Read Karvasary – the most famous suburb of Kamianets-Podilskyi
Read A journey to the Mynkivtsi state
Read
All tours